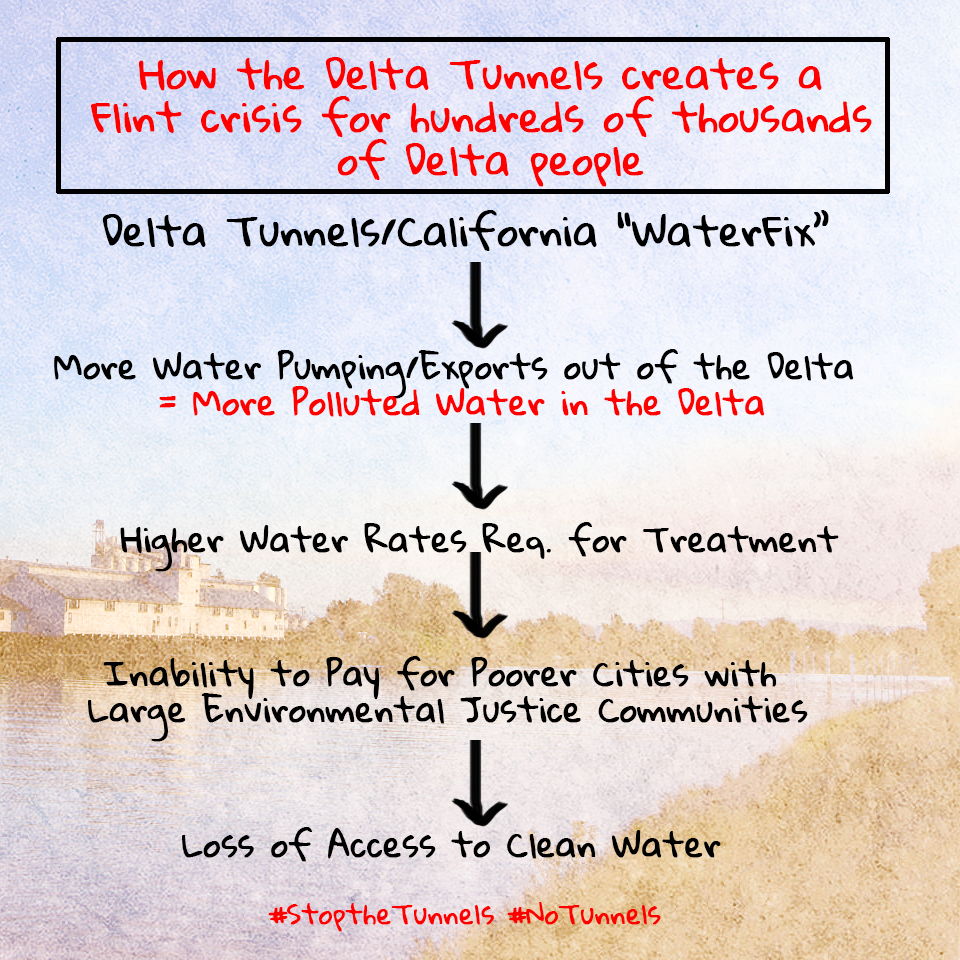 Operation of the proposed Delta tunnels, according to the Department of Water Resources’ recirculated Environmental Impact Report, will reduce essential fresh water flows through the Delta to Suisun Bay and San Francisco Bay. Nonetheless, the State Water Resources Control Board has begun the permitting process to change the point where water will be diverted into the tunnels.

The project is sold to the public as improving water quality, but tunnel proponents never explain that the benefits are solely for San Joaquin Valley agribusiness and the Metropolitan Water District, while the San Francisco Bay-Delta estuary takes all the negative impacts. That is why these questions need to be asked about water quality. Read Restore the Delta’s blog posts on water quality.

The Delta consists of 5 Californian counties: San Joaquin, Contra Costa, Yolo, Sacramento and Solano. As in the case with the Flint, Michigan crisis, as water rates go up, economically distressed counties and cities will be placed at risk because they likely will not be able to afford to clean up the increased pollution that the Delta Tunnels will cause.

Stagnant water in the Delta will increase because of Tunnel operations and climate change could bring more hot days. DWR’s recirculated Tunnels EIR/EIS acknowledges that this will increase incidence of harmful algal blooms. The most common blue-green algae species in the Bay-Delta Estuary is called Microcystis, and in 2014 DWR scientists found Microcystis late summer algal blooms running beyond October into December. Toxins from Microcystis blooms are deadly to wildlife, dogs, and human beings, and exposure can cause liver cancer in humans. It is a dangerous ecological and public health threat. The EIR/EIS for the Delta tunnels, it states, “It is possible that increases in the frequency, magnitude, and geographic extent of of Microcystis blooms in the Delta would occur relative to existing conditions” in comparison to the future condition of the Delta without Delta Tunnels.

Water exported from the Delta via the tunnels would increase the frequency and reliability with which irrigation water would be delivered and applied to agricultural lands in the western San Joaquin Valley lands where the soils have naturally-occurring high levels of selenium. At just slightly elevated levels, selenium becomes actively poisonous. As concentrations rise further, selenium can cause embryonic defects, reproductive problems, and death in vertebrate animals. Selenium-tainted agricultural drainage from these same San Joaquin Valley lands returns to the San Joaquin River and eventually to the Delta. In the National Research Council’s 2012 report on Bay-Delta sustainable water, the Council wrote:

“…Infrastructure changes in the delta such as construction of an isolated facility could result in the export of more Sacramento River water to the south, which would allow more selenium-rich San Joaquin River water to enter the bay. The solutions to selenium contamination must be found within the Central Valley and the risks from selenium to the bay are an important consideration in any infrastructure changes that affect how San Joaquin River water gets to the bay.”

Get this as a handout/document >> PDF version. A report by our policy analyst on these five questions is available at FAQs & Research.