For immediate release: July 13, 2018 Contact: Barbara Barrigan-Parrilla, Restore the Delta, 209-479-2053, [email protected]   Restore the Delta Responds to SWRCB Delta Water Quality Plan Update   STOCKTON, CA – Restore the Delta thanks the State Water Resources Control Board (SWRCB) for stating that the lower San Joaquin River (Merced River to the Delta) inflow should contribute to Delta outflow to the San Francisco Bay in their recent water quality plan update for the Delta. Restore the Delta supports increased flows through the Delta. However, Phase I of the Water Quality Plan Update for the Delta (San Joaquin River and Tributary Flow Objectives) does not: • Identify and examine water quality issues as they relate to the Delta’s environmental justice community, despite our [...]

NOTE: To watch/listen to hearings live, click here. We live tweeting the hearing @RestoretheDelta. SWRCB WQCP Stockton 12-16 – Curated tweets by RestoretheDelta   Join us at these hearing dates below to make your comments: * Note: The Hearing will go on for as long as people have public comments. It could stretch into the evening, so please plan to drop by throughout the day if you can’t make the morning time.   Earlier this year, thousands of Restore the Delta supporters signed a petition urging the State Water Resources Control Board to update outdated water quality standards for the Bay-Delta region. Now we need your action in person!   This outdated 20-year-old Water Quality Control Plan allows more than [...]

Watch/Listen to RTD's Testimony in front of State Water Board

Tomorrow starting at 9:15-9:30 am Restore the Delta and our panel will present testimony in front of the State Water Board and undergo cross examination from agencies.   Watch/listen to our testimony and hear the cross examination of our panel:   1) Click this link: https://video.calepa.ca.gov/   2) Where it says “California WaterFix Water Right Petition Hearing” and the date “12/8/2016” — click “Video” or “Audio” to see or listen it livestream.   All our testimony and declarations are listed here.

SF Chronicle op-ed: How to revive a dying delta

In case you missed it!  San Francisco Chronicle OPINION: How to revive a dying delta By Peter Drekmeier  October 25, 2016 Original link   Scientific reports published over the past several years have been unambiguous. The delta, the largest estuary on the West Coast, is on the brink of collapse.   Starved of freshwater inflow due to dams and water diversions, the Sacramento-San Joaquin River Delta’s health has faced a precipitous decline over the past few decades. The recently released Bay Delta Water Quality Control Plan offers our last best hope to revive the estuary that defines our region. The new plan calls for requiring more water to be released from dams into rivers, such as the Tuolumne, to help [...]

For Immediate Release: September 21, 2016 Barbara Barrigan-Parrilla, 209-479-2053, Restore the Delta   GOVERNOR BROWN URGES WATER BOARD TO FAST TRACK RIVER FLOWS SETTLEMENT TO FILL THE DELTA TUNNELS: Additional river flows necessary to make Delta tunnels pencil out economically and environmentally Stockton – Today, Restore the Delta’s executive director Barbara Barrigan-Parrilla released the following statement in response to Governor Jerry Brown’s September 19, 2016 letter to Chair Felicia Marcus of the State Water Resources Control Board regarding the need for comprehensive agreements on environmental flows for both the San Joaquin and Sacramento Rivers. To read the Governor’s letter, click here.   “While Restore the Delta has pushed for a comprehensive update to the Delta water quality plan for the [...]

Impacts of the Delta Tunnels Proposal: Our Testimony Before the State Water Board 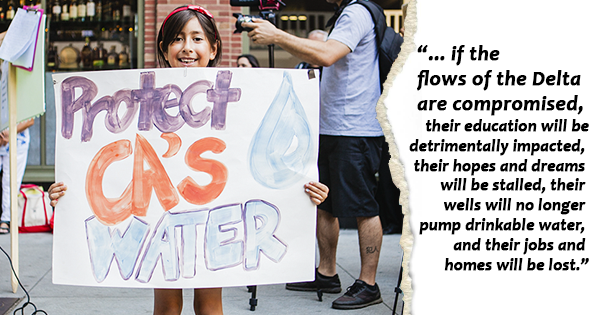 Dear friends,  Below you will find a press release with links to our testimony, we highly recommend that you read our case, which looks into statistics on Delta demographics and disproportionate impacts from the Delta Tunnels.  Also, in case you missed it, included in this post is a great story by The Record's Alex Brietler, highlighting some of the Stockton testimony that will go before the State Water Board. Our testimony would not be possible without your ongoing support, thank you!  ###  For Immediate Release: 9/2/2016 Contact: Trent Orr, Earthjustice, 415-217-2000 Barbara Barrigan-Parrilla, 209-479-2053 [email protected]   Impacts of Delta Tunnels Proposal Delta community submits testimony to State Water Board hearing   Sacramento – Today Earthjustice, representing Restore the Delta, submitted detailed testimony from the communities that will [...]

Dear friends, Below are important media alerts that deserve a wide readership! In case you missed it, media alerts:  Westlands water deal is all wet 4/30/16 San Francisco Chronicle editorial  Full article: When the public is railing about the unfairness of Big Bank bailouts and corporate welfare, why is the Obama administration pursuing a deal that gives away California water — a resource as precious as oil — to a San Joaquin Valley water agency? A proposed legal settlement would wipe off the federal books a long-standing lawsuit but also reward the Westlands Water District with what every community in the arid West would like — a permanent water contract. The proposed agreement and the changes in law required to implement [...]

Our media release for today and, in case you missed it, two great op-eds in the Contra Costa Times and the Sacramento Bee, one by Contra Costa County Supervisor Mary N. Piepho and the other by Raul Grijalva calling out latino front groups by Westlands Water District. For Immediate Release: Feb 9, 2016 Contact: Barbara Barrigan-Parrilla, Restore the Delta 209-479-2053, [email protected] DELTA TUNNELS Three Emerging Issues, Three Experts Worth Hearing Stockton, CA – In a letter sent last week to the Santa Clara Valley Water District, Barbara Barrigan-Parrilla, executive director of Restore the Delta, recommended the inclusion of three independent experts to appear before the Board to assist them in their consideration of continued financial support for the Delta Tunnels (California WaterFix). The three [...]

In case you missed it… Los Angeles Times Op-Ed Can the Sacramento Delta survive more 'regulatory flexibility'? By Doug Obegi  Published: February 3, 2016 Original article at LA Times. The state and federal Endangered Species Acts were created to prevent the extinction of our native fish and wildlife, and they've been tremendously successful. Yet despite these laws, California is on the verge of killing off some of its native salmon and other fish in the Sacramento-San Joaquin River Delta and San Francisco Bay, the largest estuary on the West Coast of the Americas. Not just fish are at risk. Our state's salmon industry is economically crucial to coastal communities and thousands of fishermen and fishing families. Salmon are also essential [...]

Delta Tunnels EIR: What Do We Know So Far?