“It is the role of government agencies to consider environmental justice concerns as they affect all groups of people, including communities of color and low-income residents that comprise a significant number of residents in Stockton and throughout the Delta region. Many of those communities are impoverished, according to the report.

“’This report addresses a number of things that San Joaquin County has been fighting for and we stand behind the principles that seek protection of the Delta and the people that we serve,’ Miller said. ‘The story of San Joaquin County is one that is deeply rooted in the story of the Sacramento-San Joaquin Delta, and the socioeconomic climate of the people who live and work in and around the Delta is a story that must be told and understood by all Californians.’

“Miller and her colleagues believe, as the report states, that the $20 billion twin tunnels project being pushed by Gov. Jerry Brown will only make the problems facing Stockton — among the most economically disadvantaged cities in the state — worse environmentally and impact the economic future of the entire region through increased water contamination, farmland degradation, levee road deterioration and job loss.”

“Assemblymember Susan Eggman, D-Stockton, says the collection of cultures and races largely chose the delta for its clean water and healthy ecosystem. The California native is against the WaterFix and pushed for a 2017 state audit which blasted the state for skyrocketing project costs and poor oversight.

“’We would not only be upsetting the environment itself, but we would be upsetting the history of all the people who have made it their home for so long,’ Eggman said of the project’s potential impact Monday.
“Stockton’s 28-year-old mayor Michael Tubbs agrees with Eggman and calls the WaterFix a ‘bad deal’ for his city. After filing for municipal bankruptcy in 2012, the Stockton area has posted four straight years of over 3 percent job growth and Tubbs says the future of Stockton’s success depends on protecting delta water quality.
“’For California to be a Golden State, to be site of the resistance, to be a beacon, it has to be the Golden State for all,’ Tubbs said.”

“Like the High Speed Rail project, the financing for the Twin Tunnels is illusory. Many of the potential major wholesale customers of water from the Twin Tunnels are highly skeptical of its viability and balk at paying for it. The one exception is the Metropolitan Water District in the greater L.A. area, which has now said it will pay for the full project. Of course, that means its customers will pay.
“Lack of transparency is another quality the Twin Tunnels project shares with HSR. Earlier this week, the Joint Legislative Budget Committee held a hearing that opened the way for an extension of the long-term contracts for the State Water Project for another 50 years. (The hearing was supposed to be conducted in the waning days of the Legislative session, but because the topic is so controversial, it was delayed until after everyone left town.)” 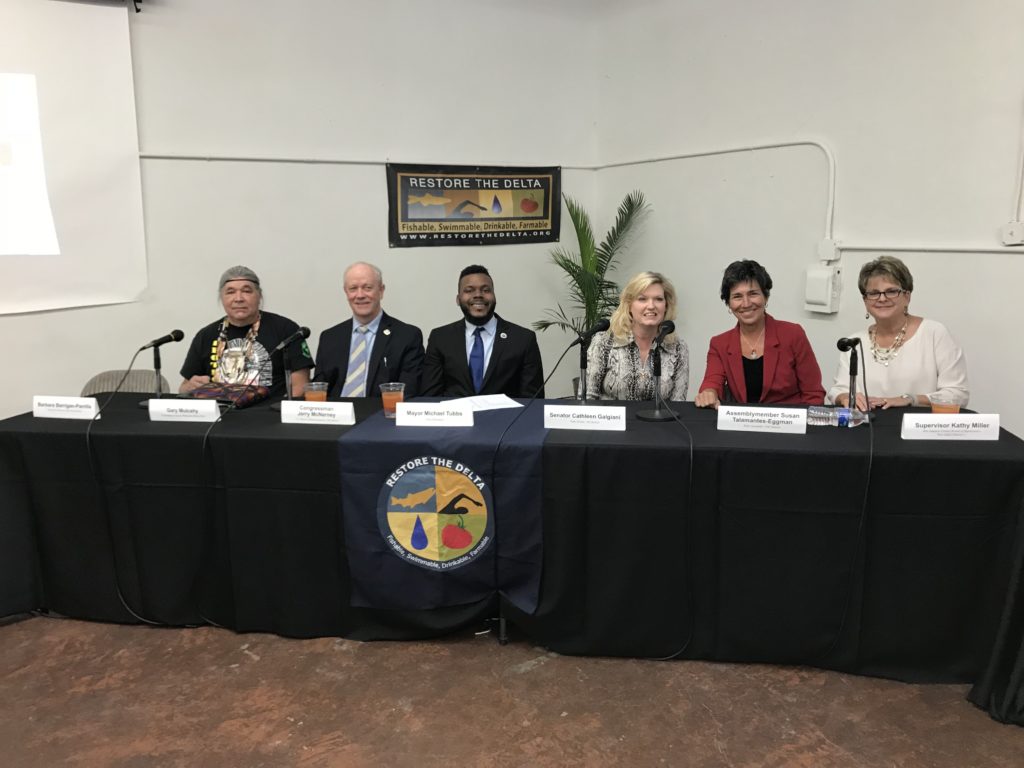 State Senator Cathleen Galgiani said,
“This report painstakingly brings to the forefront the lack of consideration that water policy makers have historically made and continue to make today toward environmental justice concerns. Actual water use and water exports needs to be taken in account to ensure that our communities along and within the Delta are not left poor, are not left unable to develop and prosper, are not left to become so resource poor that poverty becomes entrenched for generations. We need to go back to the spirit of the 2009 Delta Reform Act which called for a reduced reliance on the Delta for California’s future water needs.”

To watch video footage of our press conference click here.