Our friends at Food & Water Watch need your help. It’s time to tell key legislators: it would be completely irresponsible to hold a final hearing on the water contract until we have all the information!

From our friends at Food & Water Watch:

In the ongoing saga to stop Governor Brown’s multi-billion dollar corporate water project, CA Water Fix, now he’s moving quickly to amend California’s water supply contract so he can stick taxpayers with the bill without providing any process for transparency or public oversight.

Send a message to key state legislators: tell them to stop Governor Brown from making his next move on this corrupt water deal! 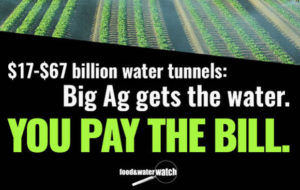 We recently exposed a major California water agency for breaking the law to pass this multi-billion dollar corporate water deal, and forced them to do a re-vote.

We knew having a re-vote wouldn’t change the outcome, but your calls and emails on top of our legal threat garnered a lot of media attention, and caused a deepening political division. Los Angeles representatives and the mayor of San Fernando were outraged about the agency’s shady back room dealings and publicly thanked us for exposing the corruption.

The funding for this project isn’t finalized and we have the strong political leverage we need to keep fighting the tunnels: keep up the pressure and send your message to key legislators today!

All the state has to do to stick us with the bill without our say is to get a key committee of the California Legislature to hold an “informational hearing” on the water contract.

After pressure from Brown — the #1 supporter of this project — the California Legislature has scheduled a final hearing for August 14 without even having a complete copy of the contract amendments.

Tell key legislators that it would be completely irresponsible to hold an informational hearing without having all the information!

Once they hold this final hearing, they will give up ALL legislative oversight on changes to the state water contract that will be in effect for the next 50 years.

What we know so far is that the contract would require that cost overruns for this boondoggle water tunnels project fall on taxpayers, and wouldn’t require a public vote, meaning residents like YOU wouldn’t have any say over how this corporate water handout gets funded!

Send a message to key legislators: tell them to stop Governor Brown from forcing this corporate water grab on taxpayers without any legislative oversight!

We’ve known for decades that we need to reduce dependence on imported water from fragile ecosystems like the Delta. We need to be investing in creating new local and regional water sources – like capturing our rain water – in order to whether climate change and future droughts.

Brown is almost termed out of office. We’ve gotten this far together, now we just need to delay the tunnels for a few more months!

Tell the legislature to delay this contract, and stop abuse of taxpayers in CA until we have all the information we need!