In her letter, Ms. Stapleton highlights that MWD has relied on false assumptions and incorrect baselines that no longer accurately reflect Metropolitan’s current $10.8 billion stake in the tunnels project. In other words, SDWA does not believe that ratepayers will pay less than $5 per month as was stated this past October when MWD was expected to contribute $3.5 billion to the project. As a means to compare and contrast projected costs to ratepayers, SDWA staff analyzed the project’s estimated household impacts for San Diego using the same assumptions staff has used to evaluate all considered alternative supply projects.

Moreover, Ms. Stapleton explains that Kightlinger’s April 20 letter “fails to note the important fact that MWD is advocating to change its State Water Project contract to provide that WaterFix costs be billed as transportation rather than supply-related.” She continues, “You are well aware that this change has a unique and material, negative financial impact on the Water Authority, its member agencies, and our region’s ratepayers, as long as the Water Authority continues to rely on MWD for transportation of its independent Colorado River water supplies. This has nothing to do with our reduced demand for MWD water. It is, for all practical purposes, a permanent tax on San Diego ratepayers even if the Water Authority buys zero MWD water in the future.”

The table below reveals that San Diego Water Authority ratepayers would face significantly higher costs than those projected by Metropolitan. 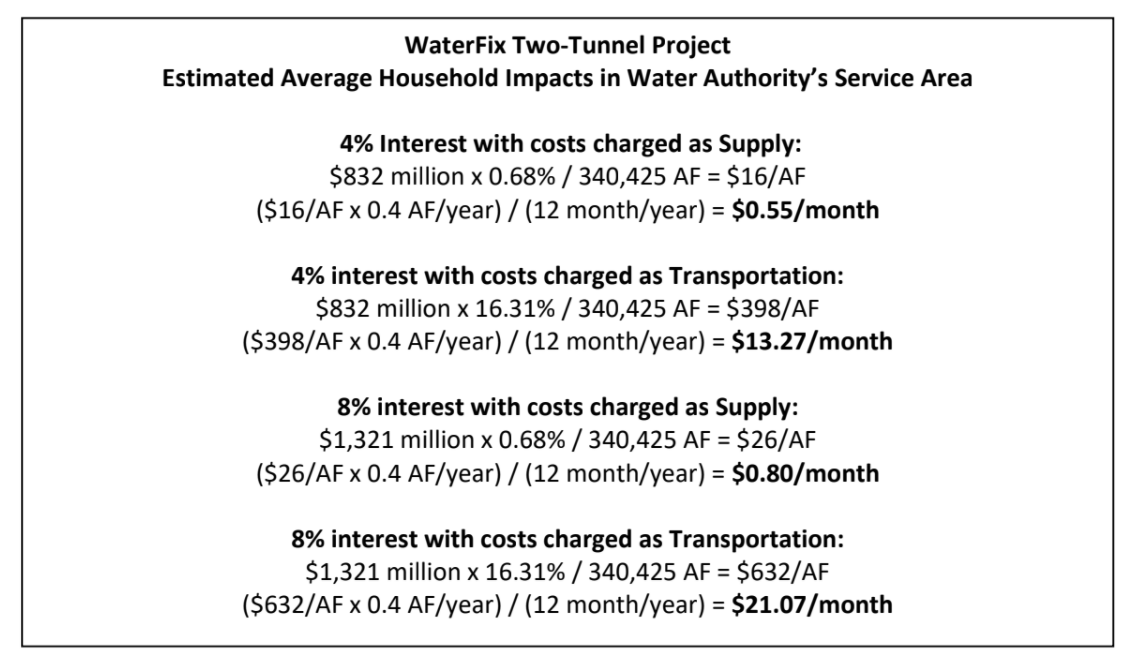 “Last week, Restore the Delta wrote a blog post on water affordability, that questioned how MWD could earnestly believe–or at the very least could claim–that Southern California ratepayers would still be paying “the cost of a latte” despite increasing MWD’s cost share of the project by over $7 billion. Our work uses the terminology of ratepayers, environmental groups, and environmental justice principles. In contrast, The San Diego Water Authority is a member agency of Metropolitan Water District led by engineers, attorneys, and water district officials. While the terminology and point of view are different, we reached the same conclusion as San Diego Water Authority. When grassroots environmental groups and large water agencies agree that a problem exists with Metropolitan Water District’s calculations for California WaterFix, a significant problem has been discovered.”

BAY AREA: Stand Up Against the Tunnels at Santa Clara Valley Water District May 2nd
{ 1 comment… add one }