Dear Friends of the Bay-Delta,

Today we take our victory lap. After 12 years of fighting the Delta tunnels, your persistent advocacy, generosity, and support for Restore the Delta has resulted in defeating one of the most formidable versions of this conveyance project. Our profound gratitude for our members, partners, and donors is immeasurable. 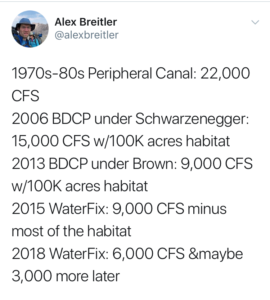 When the Peripheral Canal was struck down by voters in 1982, the public stopped a 22,000 CFS proposal.

When the project was resurrected as the Bay Delta Conservation Project under former Governor Schwarzenegger in the early 2000s, it became a: 15,000 CFS project.

When Jerry Brown returned to the Governor’s office, the BDCP shrank again to a 9,000 CFS project in 2013.

When the project was rebranded at the CA WaterFix in 2015, the state continued to push for a 9,000 CFS two tunnel project, until yesterday when the Department of Water Resources declared defeat, explaining they are planning to implement one 6,000 CFS tunnel with the possibility of adding another 3,000 CFS at a later, undetermined date.

On Wednesday, Director of the Department of Water Resources, Karla Nemeth released a letter to public agencies asked to participate in the project announcing their staged approach to construction due to lack of funding. Because of this shift in the project, DWR has to finish a new Environmental Impact Report and cost-benefit analysis by the end of this year.

Your dedicated efforts to our shared cause of protecting the Delta made this possible. Not only does your voice matter, but it is an effective agent of change.

With wind in our sails, we ask you to continue your inspired work by calling the offices of your elected officials and California Secretary for Natural Resources John Laird and expressing your opposition to their new plan for the CA WaterFix. We ask you to express your opposition to this new phased approach to the CA WaterFix project. While DWR claims this is simply a phased implementation, it is NOT the same project and should be studied extensively.

Thank you again for your assistance protecting the Delta.

Yours in Service,
Barbara Barrigan-Parrilla
Executive Director, Restore the Delta