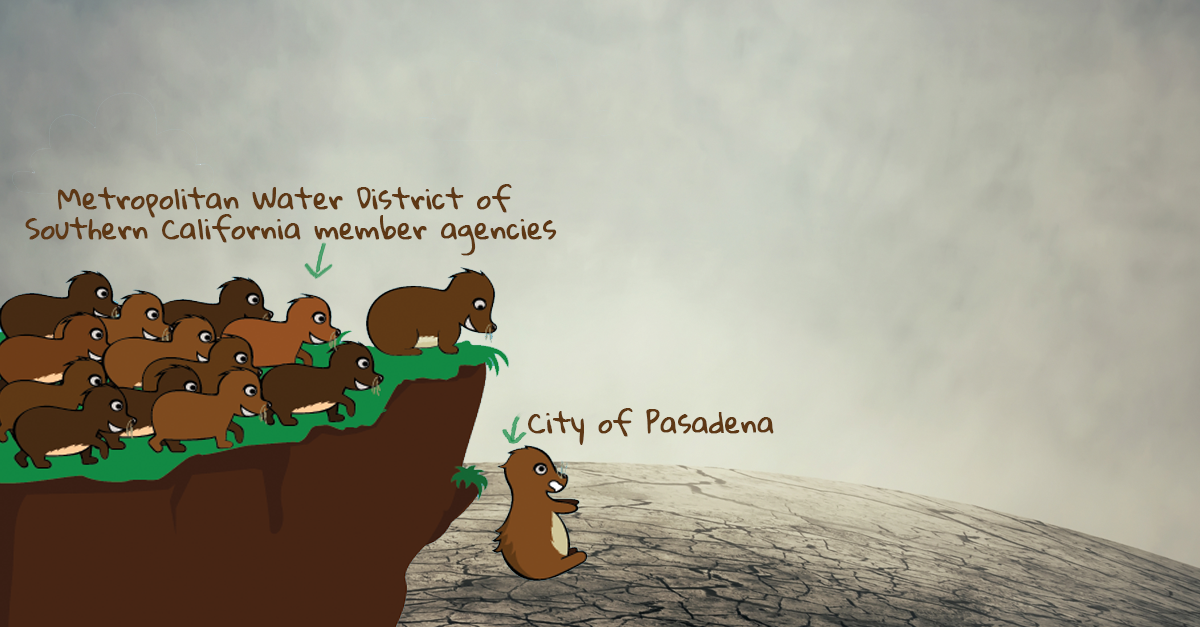 Denial can be a very powerful motivator. On September 26, 2017, we saw what was perhaps the greatest display of institutional denial in California water planning at Metropolitan Water District’s Board Workshop on California WaterFix.

Throughout Southern California, a number of MWD member agency board members, various city council members, and elected officials of all stripes had indicated in recent weeks that they were looking to the MWD workshop for answers to specific questions about costs and water delivery allocations for WaterFix before they could give their approval for the project. These sentiments were even echoed by officials who wanted to see WaterFix move forward, but who, quite understandably, also wanted to ensure that sound financial planning was in place for the project.

MWD’s General Manager, Jeff Kightlinger, chose instead to run a Board Member Workshop that played out like one of Garrison Keillor’s famous punchlines, “Sometimes you have to look reality boldly in the eye, and simply deny it.”

Concerns over costs and project viability grew after Westlands Water District voted to reject California WaterFix, with board members at Central Basin Municipal Water District deciding that they needed to delay their vote until after the MWD Workshop, and after the Kern County Water Agency vote. They wanted to understand where project costs and viability stood with the 45% gap in funding with CVP contractors not opting in to participate in WaterFix.

MWD’s General Manager, Jeff Kightlinger, chose instead to run a Board Member Workshop that played out like one of Garrison Keillor’s famous punchlines, “Sometimes you have to look reality boldly in the eye, and simply deny it.”

The first three hours of the workshop were all about who had the greatest resources to line up the most people to make public comments—a sad situation in which “might-makes-right” replaces genuine participatory democracy. In a statement following the workshop, MWD officials applauded themselves for great public participation and transparency. What really transpired is that the Southern California Water Committee and MWD officials turned out staff from member agency water districts and business chambers and had them repeat the same talking points to express support for the project. The majority of their speakers knew little about statewide water management, and a number of business speakers did not even fully understand the project. It wasn’t a real call for public participation by a public water district, but rather a performance of bureaucrats reciting what MWD leaders wanted to hear.

As a public trust organization who believes transparency is an essential pillar of democracy, we will freely admit that we also update our speakers and train them on facts, figures, and how to make comments. But we do so because we are an education, outreach, and advocacy organization. Sometimes our supporters do make factual mistakes–they are engaged Californians looking to do what’s best for their community, and more often than not, they cannot easily find straightforward, non-biased, pro-and-con information on water management decisions from water agencies like MWD. So to speak, our supporters, like Restore the Delta staff, can often see only the tip of the information iceberg, and have to break through bureaucratic ice to learn the real facts. 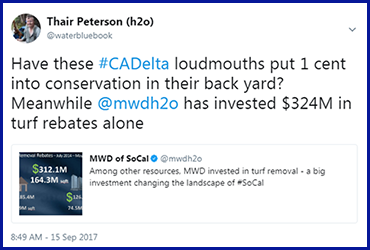 However, our unedited speakers reflected a range of real local concerns about CA WaterFix in Southern California, and expressed the need for sustainable, local water projects over costly tunnels that the community at large cannot afford. They are not loudmouths as they were called by MWD’s public affairs officer on Twitter. They are smart, passionate residents engaged in civic life, and are not part of the one percent’s business interests to acquire the state’s best water while sticking ratepayers and taxpayers with the bill.

Other public groups like the Claremont Chapter League of Women Voters are well trained on water management and made astute comments to Metropolitan Water District in a recent letter about all that is wrong with WaterFix. Such letters are never publicly acknowledged by MWD staff.

What was even more revealing was what happened after lunch. Here’s a photo of what the MWD Board Room looked like when staff presentations began. 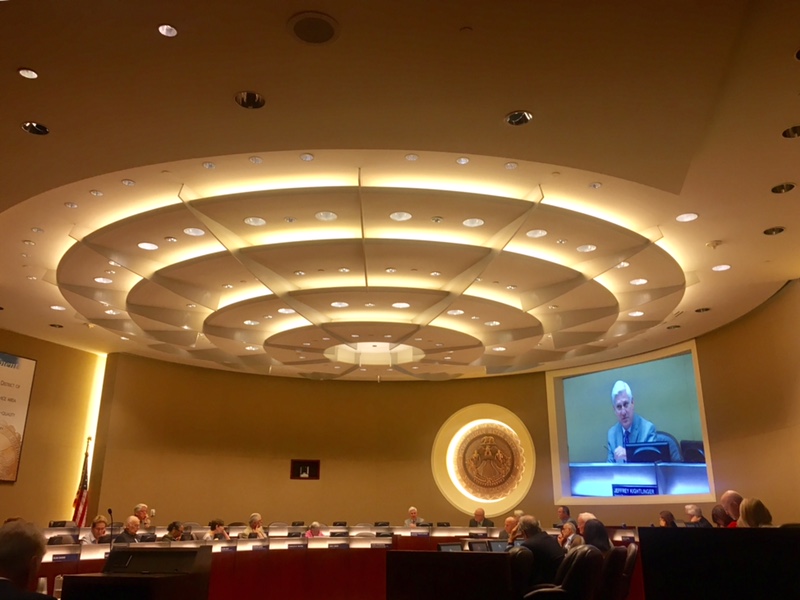 Board attendance for a workshop on what could be described as the most important local agency decision to be made in this generation had started at 67 percent. But, the majority of attending board members never made it back for presentations or to ask those important questions about how MWD planned to support a statewide project with a 45% funding gap.

Undaunted, MWD staff went about repeating recent presentations they had already given to the board of the three factually inadequate white papers on construction, water operations and financing of CA WaterFix. Staff even repeated their explanation of the State Water Project/Central Valley Project water allocation and finance split of 55% and 45%. In their universe, nothing had changed.

Yet, a few Board Members at the end of the day asked some important questions that felt like bursts of sunshine through a heavy cloud-cover of denial.

Board Chair Randy Record said (at 5:01) in a reference to the Westlands vote, “It’d be hard for me as a farmer not to make the same decision.”

Despite the project losing half of its partners, General Manager Kightlinger is still urging the MWD Board to approve funding 26% of the project in 2017 dollars—this means that board members aren’t even voting on real costs.

Kightlinger’s late-day answers were very telling. First, the EIR for Waterfix does not analyze a single tunnel. Biological opinions, operations criteria, project descriptions and financing would all need to be redone for permitting before the State Water Resources Control Board. So it seems that MWD has analyzed the 6000 cfs tunnel option, yet the analysis has not been made public via presentations by the Department of Water Resources to the public. MWD’s true intentions are hidden from the public.

Second, Kightlinger makes it clear that he is pushing for approval of WaterFix at the 26% funding level, even though he cannot answer for his board who is in as a financial partner and who is out.

In contrast, as we reported last week, Kern County Water Agency’s analysis of WaterFix dated September 15th, shows that in 2033 dollars (which allows for inflation) that KCWA anticipates WaterFix costing their agency $8 billion for about half the water that MWD would receive.

Kern County has delayed its vote to some future date in October. Some MWD Member Agency Board Members have said that they wanted to see how KCWA voted before making a decision, just like they wanted an answer to the 45% gap resulting from lack of CVP participation.

Despite the project losing half of its partners, General Manager Kightlinger is still urging the MWD Board to approve funding 26% of the project in 2017 dollars—this means that board members aren’t even voting on real costs. The project may become something else in size and operations, and would ultimately require a redo of the permitting process. Yet, the board is still expected to vote in favor of the project, even though their General Manager won’t let them read the agreements for the proposed construction and finance JPA’s.

Kightlinger is seeking MWD Board Member approval for spending billions of ratepayer and property taxpayer dollars on a theoretical project now not complete on paper, with an incomplete financing analysis, without a clear list of project partners, and a list of permitting redo’s. California WaterFix has never been more reality-challenged than it is presently, which after a quarter billion dollars and eleven years of planning says volumes about its viability and true value for California.