LA County: Stand Up to the 2% of Special Water Interests! 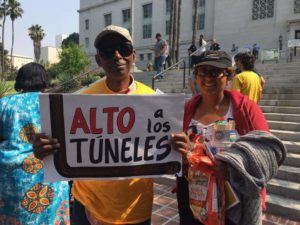 This boondoggle project will be paid by 98% of Californians to benefit the 2% of special interests that are apart of the rigged California water economy.

Speak up and rally against subsidizing Big Ag, impoverishing people and families in both Southern and Northern California AND destroying the Delta estuary!

Are you worried about unjustified and unreasonably high water and power bills from the LA Department of Water and Power (DWP)? Please join us for a public rally where we call on Mayor Garcetti to reign in DWP and to:

The Southern California Water Committee, which represents special interests that control water districts and agencies, is pushing their members to show up and make public comments. We need to make sure the public outnumbers these speakers.