What Happened at Key Water Districts This Week & More!

Friends of the Bay-Delta,

This week, Restore the Delta participated in special board meetings and workshops on the Delta Tunnels at key water districts in Southern California, Santa Clara Valley, and in the west San Joaquin Valley.

We live tweeted every meeting we were at.

On Monday, we were at the Central Basin Municipal Water District in southeast Los Angeles County at the special workshop for California "WaterFix." Our executive director, Barbara Barrigan-Parrilla debated Brandon Goshi at Metropolitan Water District. See all the live tweets.

On Tuesday morning, we traveled to Harris Ranch to participate in Westlands Water District's special workshop for the Delta Tunnels, where we documented the board members' and audience's skepticism with the Delta Tunnels plan, read all the tweets from the meeting. 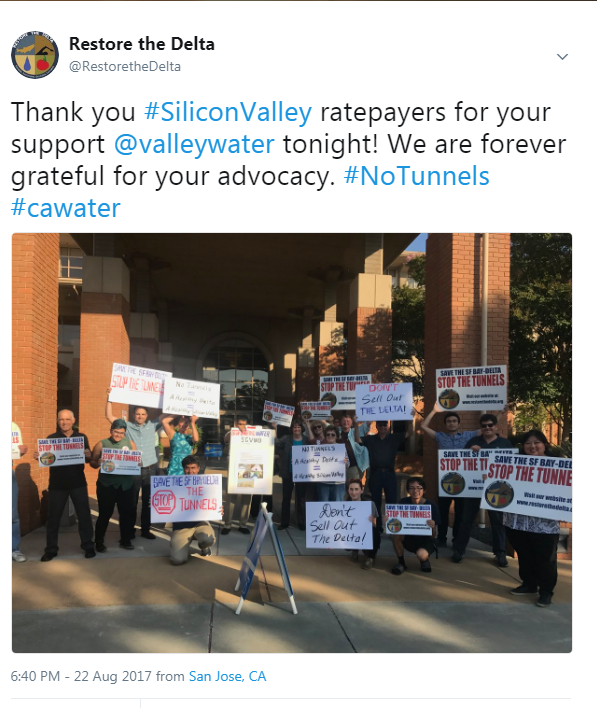 That evening, we attended the Santa Clara Valley Water District's board meeting on the Delta Tunnels. The meeting was our biggest turnout for Silicon Valley on the Delta Tunnels issue. The meeting ran until 10:00 p.m. and the room was packed with people standing and sitting on the floor! Special thanks to local ratepayers Brandi Madison at Healthy Alternatives to Pesticides and Sierra Club – Loma Prieta Chapter for organizing an early demonstration to stop the tunnels before the meeting! Photos and live tweets from the meeting here.

In case you missed it, some great reads on the Delta Tunnels fight:

Over 58 groups are suing over the Delta Tunnels, check out the Sacramento Bee article. Alex Breitler at The Record is collecting all the lawsuits at his blog here.