In case you missed it: 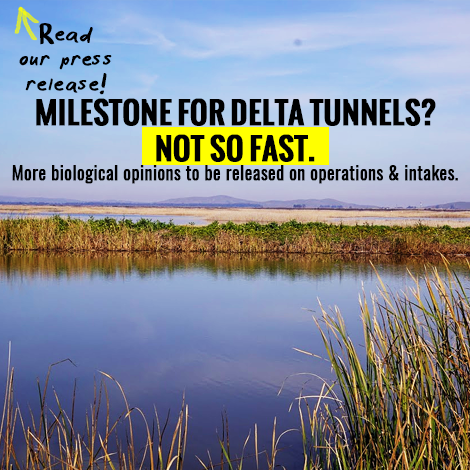 Restore the Delta has been swamped with calls from the media. We are working hard every day to make sure that our voices are represented in all stories about the Delta Tunnels. Below you will find MANY stories with several quotes from Restore the Delta's executive director Barbara Barrigan-Parrilla and our advocates from yesterday's public meeting in Stockton. Help us continue our impactful work. Make a mid-year donation to keep us strong through 2017.

The Trump Administration Just Greenlit a Project That Will Devastate California’s Most Fragile Ecosystems – Mother Jones (One of our national outlets, we also did an interview with national Fox News radio)

VIDEO: What Delta tunnel project approval means to opposition – KCRA (Interview with our executive director and coverage of our public meeting in Stockton yesterday)

VIDEO: Opponents Continue Fight Against Delta Tunnel Project – KTXL Fox 40 (Another Interview with our executive director on what the biological opinion means)

Missed our meeting yesterday? You can watch it live here: Voice of Stockton Radio was live at the Roadmap to Stopping the Delta Tunnels meeting – KXVS