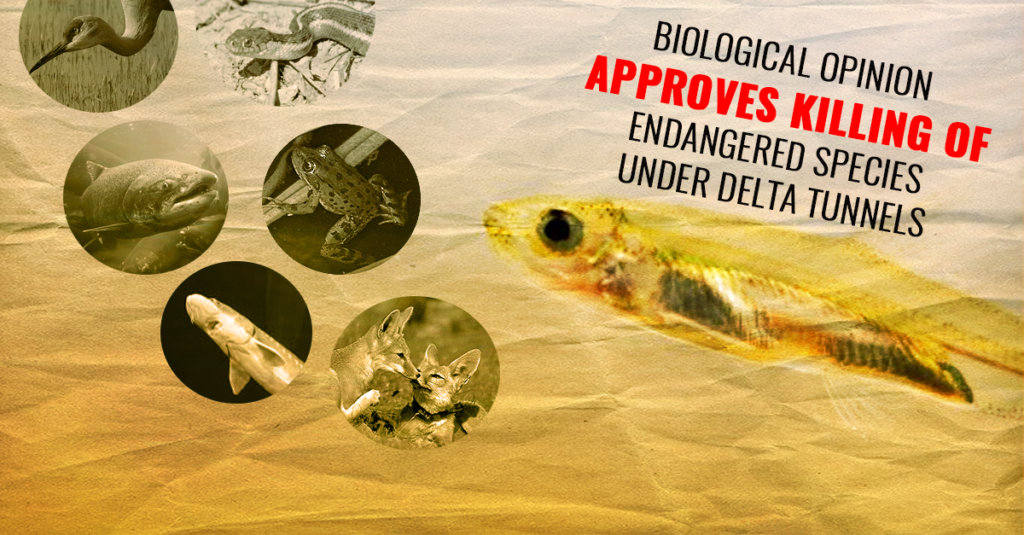 The decision was quickly denounced by San Francisco Bay-Delta activists who say the “best available science” about endangered species who depend on a healthy Bay-Delta was not fully considered, and may have been politically manipulated.

The biological opinion approves an “Incidental Take Permit” that would give the project a permission to harm and even kill federally protected species in the building and operation of Governor Jerry Brown’s proposed Delta Tunnels (also known as “California WaterFix.”)

“The science in this decision was cherry-picked and not representative of the true scope of harm to endangered species who depend on a healthy San Francisco Bay-Delta estuary for their survival,” said Barbara Barrigan-Parrilla, Executive Director of Restore the Delta. “We are pursuing legal remedies with our coalition.”

In April of this year, the findings of an Independent Review Panel found serious deficiencies in the Draft Biological Opinion.

“The Independent Review Panel report suggested that the biological opinion had serious flaws and that the Delta Tunnels will be terrible for Delta fish—those that live here year-round as well as those just passing through on their way to and from the Pacific Ocean,” said Tim Stroshane, Policy Analyst for Restore the Delta.

Yet the final decision by the Trump’s NOAA found “No Significant Impact” (FONSI). This is exactly the opposite from the conclusion made by the Independent Review Panel.

NOAA’s decision of no jeopardy comes despite the 12 percent reduction in salmon smolt due to reduced water flows through the Delta. Another 7 percent of salmon smolt are killed by faulty fish screens. Other threatened and endangered species continue to decline as more water is taken out of the Delta.

“What agencies have marketed as ‘adaptive management’ is basically trial and error management. They are saying, ‘Trust us to build it, we will figure out how to fix the harms we cause later.’ That just isn’t acceptable,” explained Stroshane.