UPDATED: The Bill To Over Pump Delta Passed!

UPDATE 12/10: We are heartbroken at the passage of the Big Ag rider and the betrayal by Senator Dianne Feinstein. She and the SJ Valley Republican Congressional Members took advantage of what is a good bill for the rest of the United States, by slipping in a scheme to over pump the SF Bay-Delta estuary. We are grateful to all the people and friends of the Bay-Delta estuary who took action. Please stay tuned on our next steps Monday. The fight will go on. 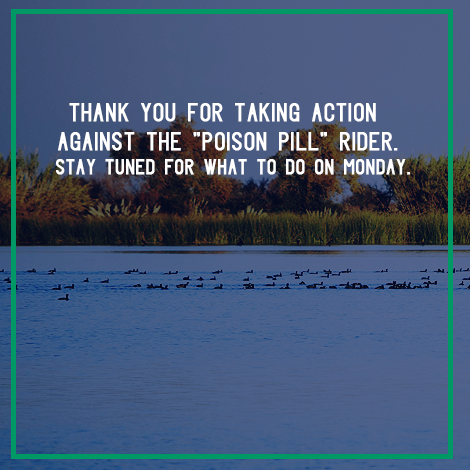 UPDATE 3:23 PM, 12/9: Watch Senator Barbra Boxer filibuster at the Senate hearing. She speaks eloquently about protecting the San Francisco Bay-Delta and our West Coast ecosystem. A vote may be expected tonight or tomorrow so keep calling.
UPDATE 9:11 AM, 12/9: Senator Barbara Boxer is pledging to mount a filibuster as one of her last acts in Congress at the Senate hearing today. This “poison pill” rider will undoubtedly devastate our already fragile Bay-Delta estuary, we still have time to strip it but we have to get our calls in today. Call Senator Dianne Feinstein now using phone numbers below — her office needs to hear our anger and opposition against this rider.
Update 11:50 AM, 12/8: The bill overwhelmingly passed the House today, see story. It will be in the Senate next for approval Friday. Now it is more critical than ever to get our voices heard. Please call today! Many leaders are opposed, including The White House. There is still hope for stripping the rider from this bill!

“It doesn’t just affect California,” DeFazio (D-Oregon) said. “If they start diverting more water from the Delta, it’s likely our fisheries will be shut down in Oregon because of this misplaced provision, which hasn’t had any congressional review.”

Another drought bill authored by Resnick-backed Congressman Valadao under the guise of of “drought relief” in California is being pushed in Congress and the goal is to pass the bill by the end of the week.

There is operational language in the bill that will take away Bay-Delta protections in order to over pump the Delta and the latest reports and statements by various legislators, newspaper editorials, and environmental groups state that the “last minute poison pill rider” will kill thousands of fishery jobs and rollback the Endangered Species Act. The Natural Resources Defense Council says this “backroom deal” may threaten thousands of fishing jobs on the West Coast and harm water quality. The San Francisco Chronicle called it tipping off for mass extinction of the San Francisco Bay and estuary wildlife species.

Tell Feinstein: Senator Feinstein, you are wrong about the last minute rider in the drought relief bill. As our senator, you need to listen to and protect the people of the Bay-Delta that you represent. I oppose the last minute poison rider in the drought relief bill by House Majority Leader Kevin McCarthy that will roll back the Endangered Species Act and destroy thousands of fishery jobs. Senator Feinstein, drought relief must protect the Bay-Delta estuary which has been in an over pumping drought for thirty years and is on the brink of collapse. Click to tweet

Tell Boxer: Thank you for opposing this poison pill rider. Please continue to fight for the protection of the Bay-Delta fisheries and flows. Click to tweet

Please call Washington DC offices and your state offices to get the message through!

We need to send a strong reminder to our legislators that they must continue to protect our Delta water quality and flows in all drought relief packages.

Thank you for taking action!
Past updates ###

.@RepHuffman calls GOP adding Calif. water to #WRDA a “slap in the face” and “latest effort to pick winners and losers during a drought”

I will use every tool at my disposal to stop this last minute poison pill rider. https://t.co/Pf6gNm8pkh #WRDA

House and Senate negotiators released a compromise Water Resources Development Act bill this afternoon and plan to send it to President Obama before the end of the week. But Senate Environment and Public Works ranking member Barbara Boxer (D-Calif.) said she would oppose the measure if the drought provision proposed by House Majority Leader Kevin McCarthy (R-Calif.) is included.