Valley Economy – March 3, 2016
Dr. Jeffrey Michael, Director of the Center for Business and Policy Research and Associate Professor, Eberhardt School of Business, University of the Pacific

In January, the WaterFix website added a "tracking" page, concurrent with several news stories and commentaries that touted how much more water could have been exported and stored this winter if we only had the delta tunnels. 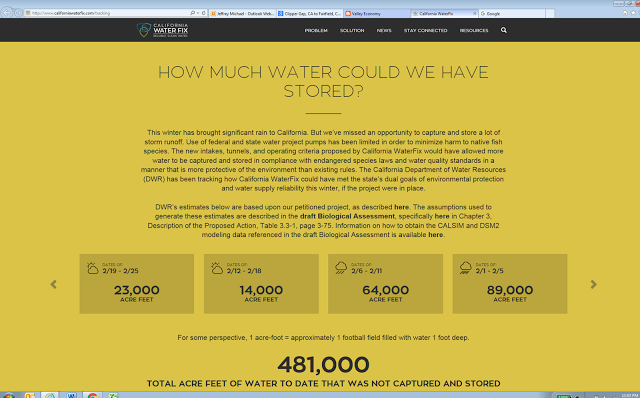 Rather than track the change in water exports for the entire year, including negative times, to give a full picture of the tunnels' impact, they turned it on in January when conditions were extremely favorable for the tunnels. It will surely go away when the numbers are unfavorable later this year, and I doubt we will see any retroactive tracking to the drought. Using the WaterFix's technical documents that the tracking site references (see page 605), I made this simple table to show how they estimate water exports would vary over the course of a typical year with and without the tunnels (all values in acre feet, converted from cubic feet per second in original source).

The tables show that the tunnels can result in less water exported during certain times and the typical annual total is only 225,432 acre feet – less than half the amount the tracking tool shows during the current favorable conditions this winter.

The tracking tool also makes a deceptive comparison to make it sound like a lot of water.  They say enough water could have been stored this winter to serve 3.5 million people for a year.  This is highly deceptive on two levels.  First, they shouldn't make an annual water use comparison unless they are going to show the performance of the tracker over a full year – rather than just a few good months.  Second, most of the water is exported to farms – not cities.  Here is a more relevant comparison.  The annual average yield of 225,000 acre feet is enough to irrigate 75,000 acres of California farmland.  Yes, the main economic value of WaterFix to California is about 75,000 acres of south San Joaquin Valley farmland that would lose irrigation water.  Using the average rental value of irrigated land in California, $400, or a typical agricultural water value of $100-150 per acre foot, that's about $30 million in annual water supply value.  That isn't much compared to the tunnels enormous price tag.
It appears that I am not the only one to notice this deceptive presentation, because I just noticed that WaterFix added the following disclaimer to their tracking website since I last visited about a week ago.

We could have gained nearly an additional half a million acre-feet of water this winter under California WaterFix, but the project on average over time is not expected to provide a significant increase in water deliveries from the Delta. The comparison of a single winter to a long-term average does not take into account the extreme variability of California’s hydrology and how California WaterFix operational rules would reduce pumping at dry times. The purpose of the project is to capture more water during winter storms when runoff is high and reduce pumping when inflow is low…

Unbelievable. They create a website full of deceptive numbers with eye-catching graphics and giant bold numbers saying it will increase water diversions and storage, and then buried in a complex paragraph at the bottom of the page you find a sentence that says that the tunnels don't actually increase water supplies.

“Santa Clara Valley Water District and Zone 7 Water Agency are considering fully supporting moving forward with Delta tunnels planning. This is bad news for their ratepayers as the water promised with the Delta tunnels simply does not exist, and CA Water Fix continues to misrepresent the truth to decision makers.

“In light of Santa Clara Valley Water District's recent ruptured pipe problem, we urge them to move forward making investments in local infrastructure to secure their water supply, and to work with the Delta community to continue drawing on a sustainable yield of Delta water in a manner that protects the watershed for the entire Bay-Delta region.”