Excerpt: Brown and big Central and Southern California water agencies are the tunnels' biggest advocates, while many Northern and Central California cities, towns and counties, and environmental and fishing groups oppose them. Supporters and opponents chiefly disagree over whether the project would further harm Northern California's winding Delta and the San Francisco Bay, the biggest West Coast estuary in the Americas and home to increasingly endangered native fish.

On Thursday, regulators of the State Water Resources Control Board weighed whether it was appropriate to start its upcoming hearings regarding the tunnels when the backers have yet to fully specify the project's design or finish legally required studies of whether the tunnels would hurt the Delta's wildlife, overall habitat and human users.

Excerpt: Every Bay Area resident has a vested interest in the Santa Clara Valley Water District's decision on whether to support Gov. Jerry Brown's $17 billion plan to build two tunnels under the Delta.

The governor's top lieutenants came to San Jose for a formal presentation to the water board Tuesday to make their case — knowing that the board had just fired CEO Beau Goldie, who was a cheerleader for the tunnels from the start. The district already has contributed nearly $14 million toward studies, and Goldie had expected ratepayers to provide at least $500 million more.

Fortunately, opponents of the plan gave the board an earful as well, and members seemed to be listening.

Excerpt: Now the board is under pressure by Gov. Jerry Brown to consider permits for the Delta Water Export Tunnels. This means the tunnels permit application will be reviewed under 20-year-old regulatory standards, not the best available scientific data and findings about how to protect species, delta agriculture and drinking water for public health.

The State Water Resources Control Board must act now. If the state board cannot handle its duties, it needs to get out of the way and allow the U.S. Environmental Protection Agency to step in and finish the task, as required under the federal Clean Water Act.

TODAY is the last day to buy tickets for our Mardi Gras benefit.
Buy tickets. 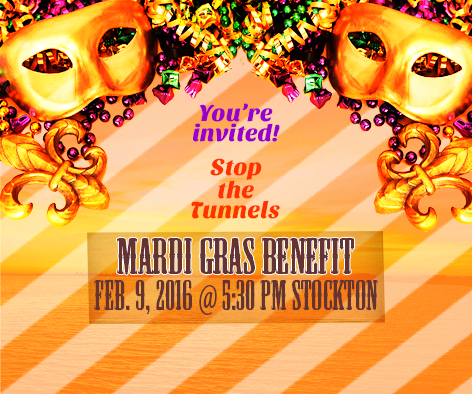 SF Chronicle Op-Ed: There is no map to California's water future
{ 1 comment… add one }