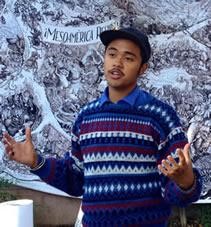 Stockton, CA – Restore the Delta is proud to announce that Ryan Camero, Delta Activist and native of Stockton, California has been selected as a Brower Youth Award winner for 2015.

This year, one of these winners is Ryan Camero, a youth activist and artist intern staffer at Restore the Delta, based in Stockton.

“I feel very grateful that my efforts are helping a larger community cause. These life-giving ecosystems are absolutely crucial to protect in the middle of this drought,” said Camero. “The fact that these awards exist to connect and uplift youth working toward environmental and social justice gives me hope. Having lived along these waterways all my life, I continue to feel compelled to prevent them from being extracted and water being controlled by unsustainable industries like big desert farms and extreme energy. The largest estuary on the West Coast of the Americas needs to not only survive, but thrive for the generations that come after us.”

A Stockton native, Ryan grew up very familiar with the economic, social and ecological threats to the sustainability of his neighborhood and his bioregion. He set out to join a group committed to building resiliency in the corner of the world he calls home. He brought in considerable artistic vision and talents to Restore the Delta.

“Ryan has led the way in making the protection of the San Francisco Bay-Delta Estuary a youth movement. In three years, we have watched him grow from a novice to a youth movement leader. As a result of his work, we now have many young volunteers in our public outreach program, which is thriving. Ryan Camero’s art and public speaking skills are helping to Stop the Delta Tunnels and to protect the Bay-Delta estuary for future generations,” said Barbara Barrigan-Parrilla, executive director of Restore the Delta.

In 2014 Camero helped create an interactive presentation called “Sucked Dry.” This travelling mural/presentation drew parallels between the current struggle to protect the San Francisco Bay-Delta estuary and the peoples’ struggles against large-scale infrastructure projects in Mesoamerica. The work was a project of the Beehive Collective, an activist art group.

Last fall, Camero led a three-week tour to 18 California cities where he presented Sucked Dry to local audiences and facilitated discussions about the fragile Delta ecosystem. He is continuing his activism through intersectional organizing, working additionally with the California Student Sustainability Coalition, of which he is a part as well as being the group that initially nominated him.