Water Export Pumps Have Run Every Single Day During Drought

Sacramento, CA- Restore the Delta (RTD), the leading opponents of Gov. Brown’s rush to build massive underground water tunnels that would drain the Delta and doom sustainable farms, salmon and other Pacific fisheries, today responded to testimony given by San Joaquin Valley farm advocates at the U.S. Senate Energy and Natural Resources Committee hearing on the status of drought conditions throughout the western United States, and also at the Drought Update given to the California State Water Resources Control Board.

“It is incredible to us that despite the fact that the pumps for the Federal and State Water Projects have yet to be turned off one day during the drought, that water quality standards are being violated in the Delta each and every day this year, impacting Delta family farms, that we are perilously close to losing Delta smelt, and our iconic salmon fisheries, and that San Joaquin Valley farming representatives continue to push State and Federal representatives for a complete sacrifice of California’s fisheries, as well as water quality for their fellow farmers in the Delta,” said Restore the Delta executive director Barbara Barrigan-Parrilla.

“As the weeks go by, it becomes clearer and clearer that the only way to stop the over pumping of the SF Bay-Delta estuary, and Governor Brown’s planned tunnels project, is for an adjudication of the Sacramento-San Joaquin Delta watershed. The problem is not inflexibility in water management. The problem is that we do not have the water to meet the insatiable demand of special interest growers in California.”

“Cannon Michael, a Los Banos farmer, and respresentative of the Family Farm Alliance, gave testimony to the Senate Energy and Natural Resources Committee on behalf of the farmers of his region, the San Joaquin Valley, but left out any mention of Sacramento-San Joaquin Delta farmers, who are making big sacrifices for the benefit of Mr. Michael’s region,” said Barbara Barrigan-Parrilla.

“Delta farmers, California’s oldest family farmers, hold the oldest and most senior water rights in California, yet they have voluntarily taken a 25% cut in water use, fallowing fields and switching to lower value, low-water crops, while the Federal and State pumps in the Delta continue to send water to the San Luis Reservoir for use by San Joaquin Valley agricultural districts that Mr. Michael represents. As part of their messaging strategy, Mr. Michael inaccurately represents California drought problems as a matter of “fish versus farms,” but it’s really large corporate farmers on the west side of the San Joaquin Valley, from Westlands to Kern County, using their political clout to control water deliveries in California, at the expense of California’s other fifty-five counties.”

Testimony by the Family Farm Alliance refers to water management in the Western United States as becoming inflexible, and seeks a remedy by changing implementation of the Endangered Species Act (ESA). “The Endangered Species Act, in addition to protecting the fisheries found in the largest estuary on the west coast of the Americas, the San Francisco Bay-Delta estuary, is also a cornerstone protection for water quality for the 4 million people who live in the five Delta counties, and the farmers who farm the Delta, the largest strip of prime farmland in California.  The ESA is what has kept the Delta from being pumped to immediate collapse during the drought,” said Barrigan-Parrilla.

“Mr. Michael talks about regulatory controls as system inflexibility, while ignoring the truth that the Sacramento-San Joaquin Delta watershed is oversubscribed in normal water years five-fold. Clearly, Mr. Michael’s testimony ignores the millions of people dependent on a healthy Delta, including the 3000 in-Delta farming and recreation water users.  It is outrageous that representatives from the Delta farming and fishing communities were once again left without a voice at such an important Federal hearing, and that the U.S. Senate is left to believe that San Joaquin Valley farmers are the only Californians suffering during the drought. The U.S. Senate Energy and Natural Resources Committee chose to hear from a minority of water interests in California.”

Simultaneously, representatives from the San Luis Delta Mendota Water Authority expressed their concern over the State Water Resources Control Board’s recent decision to suspend the Sacramento River Temperature Management Plan, because it would impede water transfers for their farming operations. SWRCB Executive Director Tom Howard issued a letter May 29, 2015, suspending earlier approval of this temperature management plan, because Sacramento River water is actually warmer than last year. In 2014 95% of winter run Chinook salmon were lost with even cooler temperatures.

Mizuno added that for many SLDMWA growers among their membership their only imported supplies are stored in the San Luis Reservoir. She explained that they may only access those supplies if Delta exports are available to facilitate exchanges of water from the Delta for water in San Luis. Pumping at the Jones Pumping Plant, is needed to complete these exchanges.

“As with the testimony at the U.S. Senate hearing yesterday, testimony in front of the State Board reveals that growers on the west side of the San Joaquin Valley only think about their interests. Delta farmers make the sacrifice, while Delta fisheries are sacrificed. It’s time for a change in thinking about who benefits from water management practices in California,” concluded Barrigan-Parrilla.

Have you taken action on a dangerous drought bill? Get calling details! 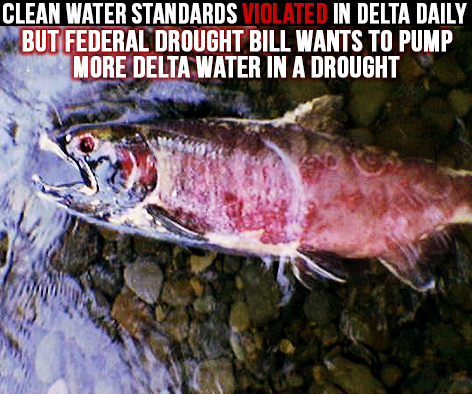