In case you missed it: Bloomberg, “Save California Farmers From Themselves.”

Save California Farmers From Themselves

You would hope the worsening drought in California would bring out the best in the state’s politicians, particularly those who profess to care about the waste of taxpayers' money.

Alas, this isn’t the case when it comes to several important members of California's congressional delegation. Take Kevin McCarthy, the House majority leader, who is using the dire conditions to call for projects to channel water to a select number of politically well-connected farmers.

"I'm from the Central Valley," the Republican congressman said, "and we know that we cannot conserve or ration our way out of this drought."

In fact, we don't know this because California hasn't seriously tried it. Agribusiness has traditionally used dry periods to demand more diversions of water from the state’s already heavily tapped mountain rivers. These proposals include two reservoirs McCarthy and other California politicians want: The Temperance Flat Dam on the San Joaquin River and the Sites Reservoir on the Sacramento River would cost approximately $3 billion each. But neither project would supply a drop of water for 20 to 25 years. It will take at least that long to plan, approve and construct the reservoirs, and in the end it's possible there won’t be enough water to fill them.

The growers and their political allies respond that if California's drought is punishing them now, the shortfall could be worse in 20 years, meaning state and federal taxpayers should ante up now before it's too late.

To understand why this is a terrible deal, look at the financial arrangements and recall the saying in the West: "Water flows uphill, toward money."

Are you coming to our NO TUNNELS meeting? We will start promptly at 6PM – 8PM at the Ambler's Club in Stockton. RSVP BEFORE IT'S TOO LATE. 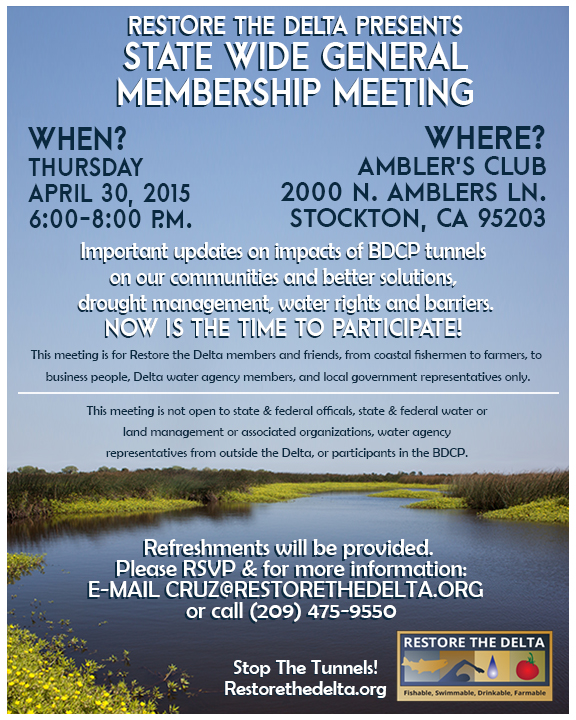 GOV. BROWN IS BREAKING HIS PROP. 1 PROMISE, Announces he WILL Use Prop. 1 Funds to Mitigate Tunnels
{ 0 comments… add one }